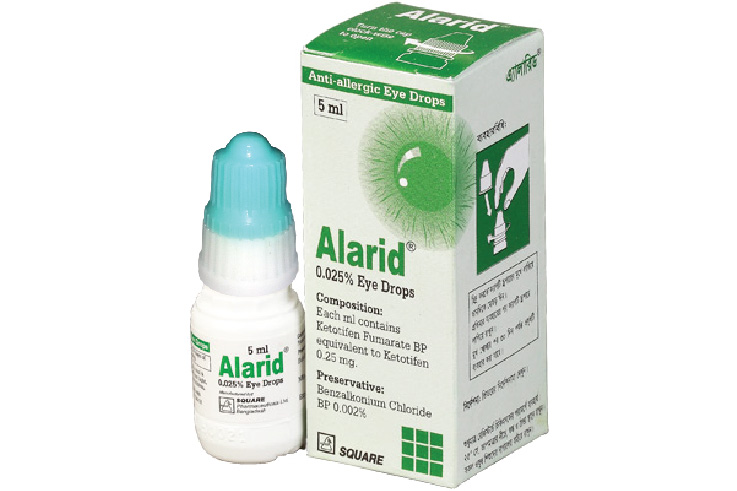 Alarid  0.025% Ketotifen Fumarate BP Alarid® 0.025% Eye Drops Sterile Solution Ketotifen is a potent anti-allergic substance possessing a powerful and sustained non-competitive histamine (H1) receptor blocking property. Ketotifen inhibits the release of mediators (e.g histamine, leukotrienes and prostaglandins) from cells responsible for type-(I) allergic reactions. Ketotifen also stabilizes mast cells, decreases chemotaxis, activation of degranulation of eosinophils. COMPOSITION Alarid ® 0.025% Eye Drops : Each ml contains Ketotifen Fumarate BP equivalent to Ketotifen 0.25 mg. INDICATION Alarid ® 0.025% eye drop is indicated for the treatment of signs & symptoms (itchy, watery, red & swollen eyes and eyelids) of allergic conjunctivitis including vernal kerato-conjunctivitis, vernal-keratitis, blepharitis, blepharo-conjunctivitis, and giant papillary conjunctivitis. DOSAGE AND ADMINISTRATION Adults and children 3 years and older:1 drop in the affected eye(s) twice daily, every 8-12 hours, not more than twice per day. Children under 3 years of age: Consult with a doctor. CONTRAINDICATION Hypersensitivity to Ketotifen or any of the components. PRECAUTION The formulation of Alarid ® 0.025% eye drops contains benzalkonium chloride as a preservative, which may be deposited in soft contact lenses; therefore Alarid® 0.025% eye drops should not be instilled while the patient is wearing lenses. The lenses should be removed before application of the drops and not reinserted earlier than 15 minutes after use. SIDE EFFECT Between 1% and 2%: Burning/stinging, punctate corneal epithelial erosion. <1%: Blurring of vision upon drug instillation, dry eyes, eyelid disorder, conjunctivitis, eye pain, photophobia, subconjunctival haemorrhage. DRUG INTERACTION If Alarid ® 0.025% eye drops is used concomitantly with other eye medications there must be an interval of at least 5 minutes between the two medications. USE IN PREGNANCY AND LACTATION There are no adequate data from the use of ketotifen eye drops in pregnant women. Systemic levels after ocular administration are much lower than after oral use. Caution should be exercised when prescribing to pregnant women. Although animal data following oral administration show excretion into breast milk, topical administration to humans is unlikely to produce detectable quantities in breast milk. Alarid ® 0.25% eye drops can be used during lactation. OVERDOSAGE No case of overdose has been reported. Oral ingestion of the contents of a 5 ml bottle would be equivalent to 1.25 mg of Ketotifen which is 60% of a recommended oral daily dose for a 3 years old child. Clinical results have shown no serious signs or symptoms after oral ingestion of up to 20 mg of Ketotifen. STORAGE Store below 250 C in a cool and dry place protected from light and moisture. Keep out of reach of children. Do not touch the dropper tip to any surface since this may contaminate the solution. Do not use after 30 days of first opening. HOW SUPPLIED Alarid ® 0.025% Eye Drops: Each plastic dropper bottle contains 5 ml sterile Eye Drops. Close the upper part of the cap with the container just after the use. Pierce the BFS container by screwing the Two- parts Cap clock-wise. Open the upper part of the cap only Use the required amount of medication. 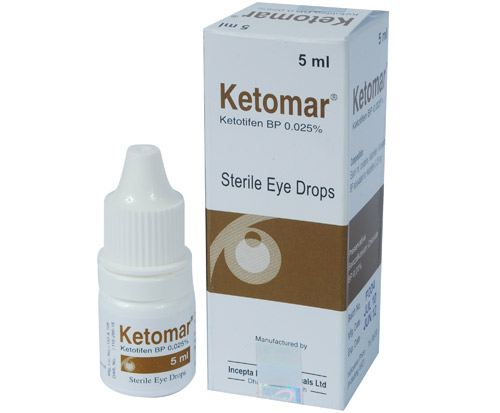 There are Items In Your Cart.