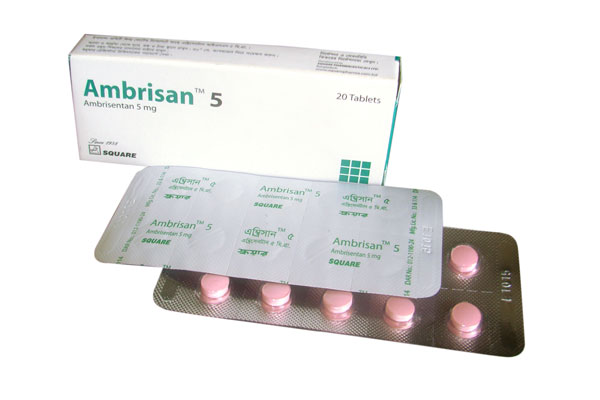 Presentation AmbrisanTM 5 Tablet: Each tablet contains Ambrisentan INN 5 mg. Pharmacology Endothelin-1 (ET-1) is a potent autocrine and paracrine peptide. Two receptor subtypes, ETA and ETB, mediate the eects of ET-1 in the vascular smooth muscle and endothelium. The primary actions of ETA are vasoconstriction and cell proliferation, while…

Presentation AmbrisanTM 5 Tablet: Each tablet contains Ambrisentan INN 5 mg. Pharmacology Endothelin-1 (ET-1) is a potent autocrine and paracrine peptide. Two receptor subtypes, ETA and ETB, mediate the eects of ET-1 in the vascular smooth muscle and endothelium. The primary actions of ETA are vasoconstriction and cell proliferation, while the predominant actions of ETB are vasodilation, antiproliferation, and ET-1 clearance. Ambrisentan is a high anity ETA receptor antagonist with a high selectivity for the ETA versus ETB receptor (>4000-fold). The clinical impact of high selectivity for ETA is not known. Pharmacokinetics The pharmacokinetics of Ambrisentan (S-Ambrisentan) in healthy subjects are dose proportional. The absolute bioavailability of Ambrisentan is not known. Ambrisentan is absorbed with peak concentrations occurring approximately 2 hours after oral administration in healthy subjects and PAH patients. Food does not aect its bioavailability. In vitro studies indicate that Ambrisentan is a substrate of P-gp. Ambrisentan is highly bound to plasma proteins (99%). The elimination of Ambrisentan is predominantly by non-renal pathways, but the relative contributions of metabolism and biliary elimination have not been well characterized. In plasma, the AUC of 4-hydroxymethyl Ambrisentan accounts for approximately 4% relative to parent Ambrisentan AUC. The in vivo inversion of S-Ambrisentan to R-Ambrisentan is negligible. The mean oral clearance of Ambrisentan is 38 mL/min and 19 mL/min in healthy subjects and in PAH patients, respectively. Although Ambrisentan has a 15-hour terminal half-life, the mean trough concentration of Ambrisentan at steady-state is about 15% of the mean peak concentration and the accumulation factor is about 1.2 after long-term daily dosing, indicating that the eective half-life of Ambrisentan is about 9 hours. Indication and uses Ambrisentan is indicated for the treatment of Pulmonary Arterial Hypertension (PAH) (WHO Group 1) to improve exercise ability and delay clinical worsening. Dosage and administration Initial treatment is 5 mg once daily, and can be increased to 10 mg once daily if 5 mg is tolerated. Tablets may be administered with or without food. Contraindications Ambrisentan may cause fetal harm when administered to a pregnant woman. Ambrisentan is contraindicated in women who are or may become pregnant. If this drug is used during pregnancy, or if the patient becomes pregnant while taking this drug, the patient should be apprised of the potential hazard to a fetus. Pregnancy must be excluded before the initiation of treatment with Ambrisentan and prevented during treatment and for one month after stopping treatment. Ambrisentan is contraindicated in patients with Idiopathic Pulmonary Fibrosis (IPF) including IPF patients with pulmonary hypertension (WHO Group 3). Adverse eect Decreases in hemoglobin concentration and hematocrit have followed administration of other endothelin receptor antagonists and were observed in clinical studies with Ambrisentan. Warnings and precautions Fluid Retention: Peripheral edema is a known class eect of endothelin receptor antagonists, and is also a clinical consequence of PAH and worsening PAH. Pulmonary Veno-occlusive Disease: If patients develop acute pulmonary edema during initiation of therapy with vasodilating agents such as Ambrisentan, the possibility of pulmonary veno-occlusive disease should be considered, and if conrmed. Ambrisentan should be discontinued. Hematological Changes: Decreases in hemoglobin concentration and hematocrit have followed administration of other endothelin receptor antagonists and were observed in clinical studies with Ambrisentan. Hepatic impairment: Ambrisentan is not recommended in patients with moderate or severe hepatic impairment. Drug interactions Multiple dose co-administration of Ambrisentan and Cyclosporine resulted in an approximately 2-fold increase in Ambrisentan exposure in healthy volunteers; therefore, limit the dose of Ambrisentan to 5 mg once daily when co-administered with Cyclosporine. Use in pregnancy and lactation Pregnancy Category X. It is not known whether Ambrisentan is excreted in human milk. Breastfeeding while receiving Ambrisentan is not recommended. Pediatric use Safety and eectiveness of Ambrisentan in pediatric patients have not been established. Storage condition Store in a cool and dry place, below 300 C. Protect from light and moisture. How supplied AmbrisanTM 5 Tablet: Each box contains 20 tablets in blister pack. AmbrisanTM Ambrisentan

There are Items In Your Cart.